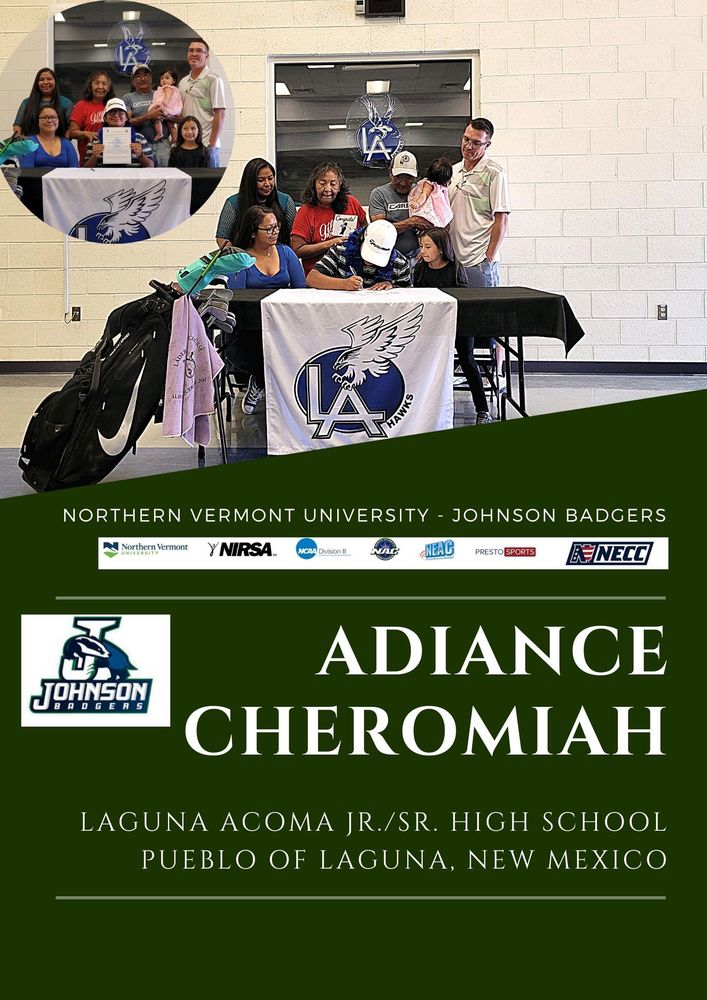 The Laguna Acoma Jr./Sr. High School senior will play college golf after signing his letter of intent to attend Northern Vermont University - Johnson. Cheromiah is the only senior of the LAHS graduating class of 2022 who earned a sports scholarship to play in college.

"Adiance has been playing golf for a short amount of time and for the most part, is self-taught. He joined the LAHS golf team in August 2021 and was nominated team captain in January 2022." - LAHS Head Golf Coach, Jacob Ontiveros.

As a senior, Cheromiah placed 1st in Crystal Wood Memorial Boys Tournament, 1st at Coyote del Malpais, and was one of fifteen youth golfers (13-17) selected from New Mexico to be a part of the Notah Begay III (NB3) Fit Golf Team.

"In NMAA A-2A Districts, Adiance was down by 3 strokes after the first 9 holes but he fought back and made an incredible comeback to win the district tournament by one stroke. In May, he also participated in the NMAA A-2A Golf State Tournament where he received a 6th place medal. He played against the best players in the state and earned it. " - Coach Ontiveros

"This is just an amazing experience to see that what I have worked for and persevered through to accomplish this goal is exceptional. I am truly grateful for everyone who has helped me and who will continue to help me. I couldn't have done this without help from my family and peers who believed in me, as well as through who doubted me because they pushed me the most because I wanted to prove them wrong." - Adiance Cheromiah

Coach Ontiveros along with everyone else at LAHS and the LAHS community would like to wish Adiance good luck on the next stage of his golf career.