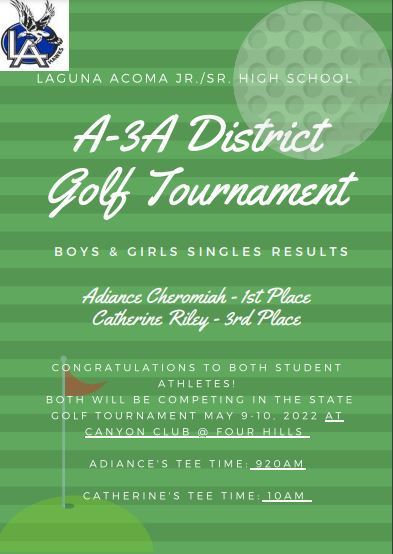 Congratulations to both Adiance Cheromiah and Catherine Riley who both played excellent yesterday at the A-3A District Golf Tournament. Catherine took home the third place medal for overall Girls Singles Competition. Adiance was down by three strokes after the first nine holes. He fought back to tie up the match on the 17th hole with one more hole to play. After hitting a phenomenal drive on the 18th with his hybrid, his second shot landed in the green side bunker. With district championship on the line, Adiance hit a beautiful 20-foot bunker shot that barely missed the hole and stopped about 1 foot away. His competitor had to make a 30 foot putt to keep the match all square. His competitor missed his putt by literally inches. Adiance stepped over his putt and sunk his 1 foot putt to bring home Laguna-Acoma’s first ever Singles District Boys Championship. Adiance and Catherine will be competing in the state championship this coming Monday and Tuesday.

"I would like to say, I am proud of the whole LAHS Golf Program. All of you have done an absolutely amazing job this season and I hope all of you continue to improve your skills for many years to come." -Coach O